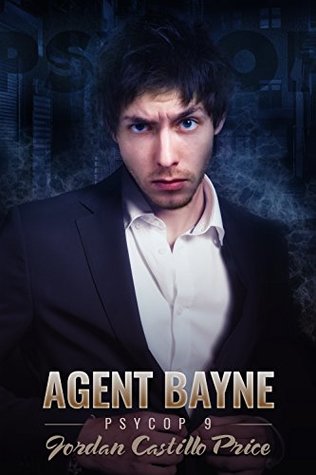 About the Book: Victor Bayne is through with the Chicago PD. Can he handle the FPMP?

After years of frustration as a PsyCop, Victor Bayne reports for duty at the Federal Psychic Monitoring Program. As a fledgeling agent, he’s ready to smoke out a few ghosts and be home each night in time for dinner. But is he prepared to add a professional dimension to his romantic partnership with Jacob Marks?
Jacob has already established his territory in the Program—he’s competent, he’s respected, and he’s pretty much fearless. The last thing Vic wants to do is screw up in front of him.
When fellow agents start turning up dead, Vic is expected to do more than just lay their ghosts to rest. But what if his psychic talent isn’t quite enough? As the death toll rises, he and Jacob scramble to determine who’s in danger, and who’s a killer.
Using all the resources at their disposal, they close in on their suspect. But as they do, their past comes back to haunt them…and even Jacob worries they’ve tampered with forces they should have left alone. Are their combined talents enough to protect them from enemies both living and dead?

I feel completely spoiled!  Usually the wait between PsyCop books span years, but I feel like we just read Skin After Skin, now we have Agent Bayne, and JCP says book 10 will be out towards the end of the year!  I’ve gotta try really hard not to get used to this!

Honestly, there’s no perspective I enjoy more than Victor Bayne.  I’m not even talking about this series in particular, I’m talking about all the books I’ve read, Victor Bayne’s voice is my favorite.  I love how hilarious he is, in a self-deprecating way.  I love his awkward thoughts about family and friends, particularly how he feels about Jacob.  And Crash.  I love every interaction between Crash and Vic.  Crash and Jacob represent the kind of man Vic thought he’d end up with vs the kind of man he did end with.  As much as I love Crash, I’m so crazy about Vic and Jacob’s romantic life.  Talk about relationship goals.

Anyway, I did a whole post about it previously but I really relate to Vic and how he views himself.  I think if I were a high level medium, well I probably wouldn’t have made it, but if I had then I’d be just as high strung and paranoid as he is.  And brave.  Vic is very brave.  Everyone should read this series just so they get to know this character.

As for how I felt about Agent Bayne specifically?  I loved it, obviously.  I’m not surprised by how awesome it was.  I’ve been reading this series for years now, having discovered it in 2011, and I never grow tired of it.  I did feel like Agent Bayne was a ‘bridge’ book, meaning the world we know is changing and we needed to tie the old and new together.  Even though it’s still ‘PsyCop’ the series, Vic is stepping out in a new role and we have to get used to his new space just like he does.

There was a case for our hero to solve, but I really felt like the goal of the story was to immerse us into this new life.  It was to show us what the future should, maybe, look like and how this new dynamic will work between him and Jacob.  So, when I say that the mystery didn’t capture me the way previous books did I’m not putting the plot down.  I payed attention and figured out whodunit pretty early, which only made me slap my forehead at Vic and Jacob because it felt so obvious.  The upside was, the case and the new job gave us a chance to get to know Dead Darla and I already love her.  I hope she and Vic become bestest friends.

And guess what?!  I only have to wait until later this year to find out!  Yay!