My sister B-Rex thought it would be fun to interview me for my 2nd year Blogiversary.  Technically it’s passed, but I still wanted to share our conversation since we’re both such nerds.  I hope you find us as entertaining as we find ourselves!

B-Rex:
What book do you wish were made into a movie?

Birdie: If I could take my brain and build a movie, that would be one thing.  I can’t, so I would pick something lighter.  Something that would translate well, without losing anything substantial.  My pick would be The Hating Game by Sally Thorne, because Rom-Com’s are are my favorite movies.  While there have been many enemy to lover’s movies (and books), there was something special about The Hating Game.  I would LOVE to see Lucy and Joshua’s ‘hate’ competition brought to life.

B-Rex:
Which character reminds you most of Baby Chick?

Birdie: The character that reminds me most of Baby Chick is a dragon from the comedy/fantasy series Tales from Verania by TJ Klune.  This dragon is emo, calls himself Zero RavynMoonfire, and he’s all about how nobody understands him and his dark poetry, his ‘deep pain’, and of course everyone is ‘ruining his liiiife’.  In fact, sometimes I call Baby Chick my Little Emo Dragon.  Affectionately, of course.

Birdie: Exactly!  She secretly loves being my Emo Dragon, too.  She drew this: 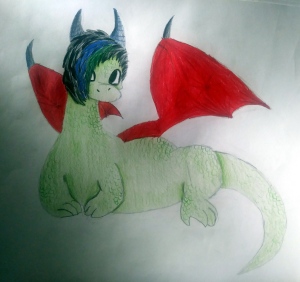 Birdie: The series I loved that has gone on too long… there have been a lot of them, but the one that really gets to me is Stephanie Plum by Janet Evanovich.  It went from a fun hilarious series to one that felt overly exaggerated and stereotypical.  I really lost interest when I found out the author had no plan to age or further the characters at all, or even have Stephanie pick a man in the end.

The series that ended too soon was Immemorial Year by TJ Klune.  It had enough closure that I don’t feel incomplete, but it kills me how it ended due to not enough interest, and until TJ blows up, and he is on his way, he relies on sales of each book to afford to live as a full time writer.   He has to write what sells, to a certain extent.  It just sucks because immemorial Year is some of his best work and lack of interest shouldn’t be why it ended.

B-Rex: Oh, you do love that dude… Or Teej as you call him.

Birdie: My bestie Teej, who doesn’t even know I exist!

B-Rex:
Which book have you had to rebuy most often?

Birdie: The only book I’ve ever bought over and over is Outlander.  That’s because I feel a compulsion to buy every copy I come across at garage sales.  (Or at bookstores if I’m being honest.)

B-Rex: Yes.  Somehow I own three friggin copies, and I’ve only read it once.

Birdie: Well I have the audio too.  And an e-copy.  Does that count?

B-Rex:
Which book always makes you cry, but you love it?

Birdie: The book that always makes me cry but I love it is Clan of the Cave Bear by Jean M Auel.  It’s been a while since I read it, but growing up I read it over and over and I bawled every single time.  Ayla’s amazing adoptive family, who I feel like I know deep inside.  All her strife and pain trying to be part of the clan.  Then, the ending.  It killed me.

Birdie: How to be a Normal Person by TJ Klune.  There’s something about Gus that cracks me up.  He’s one of the best, most interesting characters I’ve ever read about.  Every interaction between Gus and Casey tickled me.  Other books have made me laugh, but I’ve read and listened to HTBANP about 4-5 times and I cry with laughter every time.  I’ve even read quotes to Mr Birdie and he cracks up too.

B-Rex:
Which book legit scared you?

Birdie: I’m rarely scared by a book.  However, IT by Stephen King legitimately hit my fear buttons.  I tried to read it multiple times but couldn’t get past the first few chapters.  (if you don’t want spoilers, stop here and skip to the next question.) First is Georgie’s death by Pennywise in the sewers, which was hard.  But after that is a scene where a gay man is brutally assaulted walking home, thrown bloody and broken in a river, and then eaten by Pennywise.  Aside from the flesh eating clown, the assault was too real and too violent.  It not only scared me, it made me feel physically ill.  And when I did finally read the whole book, I accomplished it by skipping that scene.

B-Rex:
Which book had your first character crush?

Birdie: My first book crush was Gilbert Blythe from Anne of Green Gables… I saw the movie first, but it friggin counts.

Birdie: *fingers in ears* I can’t hear you!

B-Rex: WTF are you typing with?!

Birdie: Oh my god, the visual!

B-Rex:
What book themed tattoo would you get if you were on Inkmaster?

Birdie: Every time I fall for a book there’s something I want to get as a tattoo.  I read the Black Dagger Brotherhood series, by JR Ward, and swore up and down I wanted eyes, one blue and one green, for Qhuinn.  As my BDB obsession faded, so did my need for the tattoo.  Thank God.  So, I’m safest saying I’d get an Outlander tattoo.  A quote and an image probably.  I’ve thought about it before but haven’t decided on which one.  That series means so much to me, and I’ve never stopped loving it.  I’d want something meaningful to me, and that’s something from Outlander.

Birdie: Whatever!  NO!  It’s not about sex!  It’s the romance!  I’m thinking something like “Don’t be afraid.  There’s two of us now.”

B-Rex: Wrapped around his sword?

Birdie: Whatever.  Suuure you did.

B-Rex:
If you could be any character, who’d it be?

Birdie: If I could be any character I’d want to be Natalie Grayson from Cream of the Crop by Alice Clayton.  She’s my favorite fictional (adult) heroine.  She’s a bigger woman who loves herself just as she is.  She rocks her curves with confidence and sexuality.  It was the first time I read a romance novel where the heroine talks about how in society size 18 women are supposed to cover up, hide their arms and legs and waist.  Natalie says “fuck all that noise.  I proudly take up space.”  I want to be like Natalie.

B-Rex: Who is your fave kid heroine?

Birdie: My Ya Heroine would be Hermione!  Of course!

Birdie: Lumatere Chronicles by Melina Marchetta.  I’ve read a lot of books with strong girls/women, but they all follow the same format of strength in the masculine sense.  Rarely do you get Hermione’s, and she is so special.  In fact, she was the first strong girl I thought of.  The only reason I’m choosing Lumatere is because there are three female primary characters and they are all so strong, but in different valuable ways.  Evangeline is strong in mind, intelligent and able to take care of herself.  Phaedra is strong of heart, even in the face of cruelty, and Quintana is strong of spirit no matter how hard they try to break her.  That’s the core of why I love this trilogy.

B-Rex: I would choose Jurassic Park.

Birdie: You would choose Jurassic Park for girl power?

Birdie: Only you would remember the sex of the T-Rex.

B-Rex: BIRDIE! ALL THE DINOSAURS IN JURASSIC PARK ARE FEMALE!!

Birdie: My favorite best-friendship is all the characters in On the Jellicoe Road by Melina Marcheta.  It’s really hard to explain why, because this story is so incredibly character driven, without an obvious plot.  I also could have used this book for one that’s made me cry, but I thought it fit this question better.  It’s the depth of the friendship that is the catalyst for my tears.  It’s another past and present overlapping story.  Both the past and present tell stories about 5 friends and their bonds.  In the present day Taylor has had a hard life, and she struggles connecting with her peers at her boarding school.  The connections she makes during the territory wars with the cadets and townies hits you right in the feels.  Then, in the past, the 5 friends support each other after an extreme tragedy.  You just love every single one of them.  I feel like I’m not representing this book well, yet it’s hard to really explain.  The book is complicated, and you’d be better off reading it.  Basically, Melina Marchetta is so good at nailing characters and relationships.