I think I’ve found the best place on earth:
The Klunatics Facebook group!
When I explained how hard my last two weeks have been, due to the pregnancy loss, and asked for romance recommendations that were angst and grief free, reads that would lift my spirits and make me feel happy, the responses were overwhelming!  Not only did they express their condolences for my family but they flooded me with the most amazing feel good books!  It really is the most inclusive group I’ve ever joined.

Below are my thoughts on a few of those recommendations.

About the Book: A new person will enter your life in the early year, Leo. Look past any moments of frustration they might bring and laugh—this could be the start of a thriving friendship.

Theo Wallace usually laughs at the horoscopes his mom sends. Still hung up on his ex-girlfriend and practically friendless, this one begs him to reconsider. Because a friendship that stuck, that thrived…

Well, that would be a reason to leave past pains behind and look to the Bright Future.

When his sister Leone challenges him to find her the perfect date for a spring wedding, Theo uses it as a chance to make new friends. Theo’s ex economics tutor and newest roommate Mr. Jamie Cooper seems to be a possible and convenient match. Real convenient. Like written in the stars, convenient.

All he has to do is make sure this Jamie is good enough. Could really be The One for her, and the friend for him.

But watch out, Leo, the stars have a surprise in store…

“The worst thing I’ve done on a date? Ask who her favorite serial killer is. Under a bridge. In the dark.”

Leo Loves Aries was exactly what I was looking for in a romantic story.  From the very first page the only thing I felt was joy and laughter!  I was so captivated by these characters that I started the book at 9:30pm, and I read it straight through until 2pm.  From beginning to end, no breaks and no regrets.

I’m a sucker for rapscallion main characters in a romance novel, and that is the perfect way to describe Theo Wallace from Leo Loves Aries.  His antics were ridiculous but still incredibly charming.  I’d fallen in love with him before Jamie even entered the picture, so it was believable how quickly Theo got under Jamie’s skin.  Theo was irresistible!

Oddly enough, I think my favorite part of Leo Loves Aries was how completely oblivious Theo was!  Normally that level of cluelessness would drive me insane, and not in the good way, but for some reason on Theo it was adorable.  Both Jamie and I were exasperated and amused.  You have to be pretty unaware when you don’t recognize being hit on even when they’re blatantly sucking your finger, and yet it made me giggle with an affectionate eye roll.

I’m telling you, this was an all around fun read, full of good feelings.  Normally stories have those moments you dread, when everything blows up and one character has to make the other trust them again.  Well, I generally dread it at least.  When it comes to romance, I want the sweet stuff.  I think that’s exactly why Leo Loves Aries was so spectacular for me.  Everything was sweet.  No emotional plummets.  Just two men falling in love.  Perfection! 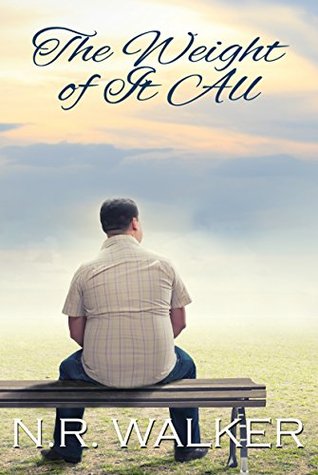 The Weight of it All
N.R. Walker
Standalone
BlueHeart Press | September 12, 2016

About the Book: After being dumped by his long-term boyfriend for being overweight, Henry Beckett decides to make some drastic changes. In a vain attempt at getting his boyfriend back, Henry does the most absurdly frightening thing he can think of. He joins a gym.Reed Henske is a personal trainer who isn’t sure he’ll ever be ready to date again. He’s sick of guys who are only interested in the perfect body image, never seeing him for who he really is.

As Reed tortures Henry with things like diet and exercise, Henry enamours Reed with recipes and laughter. As the friendship lines start to blur, Henry is convinced there’s no way Thor-like Reed could ever be interested in a guy like him.

Reed just has to convince Henry that life isn’t about reaching your ideal bodyweight. It’s about finding your perfect counterweight.

I was sold on The Weight of it All when someone compared Henry to TJ Klune’s Bear and Paul.  That was honestly all I needed to convince me I had to have this book.  (It also helped how much I liked N.R. Walker’s Spencer Cohen series.)

I asked for funny and heartwarming, and it’s exactly what I got when I started reading about Henry and Reed.  Henry was funny, and Reed was heartwarming and their dynamic really worked out well.  It was obvious Reed was falling for Henry’s word vomit and sense of humor, and yet at the same time you could completely understand why Henry struggled with believing someone who looked like Reed could possibly be attracted to him.  When you’re told you’re worthless, it leaves an impression.  If Henry’s douchebaggy ex, who’d known him for 8 years and was supposed to love him, thought he was unattractive then how in the hell could ‘Thor-like’ Reed ever see worth in Henry.  It was easy to see how Henry’s lack of self-confidence was their biggest obstacle.

It’s a giant obstacle, which could have led to soo much angst but it didn’t.  I believe the reason it didn’t was because of Reed’s perseverance and understanding.  Reed didn’t allow any misconstrued feelings to come between their budding relationship.  It was because of Reed this love story remained so sweet and upbeat.  Henry’s humor helped, but honestly it was more about Reed’s openness and love.

The only reason I didn’t give The Weight of it All five stars was simply because of Reed’s backstory.  I saw it coming from a mile away, and I suppose it was fitting.  It’s just, think I would have preferred if Reed’s ability to look beyond the perfect body came from who he was organically, and not due to history.

Regardless, Reed and Henry were perfect partners, and this was another incredibly enjoyable read.

About the Book: Is it really wrong to want to murder your boss?

Not surprisingly he has devoted a lot of time to increasingly inventive ways to murder Gabe. From stabbing him with a cake fork, to garroting him with his expensive tie, Dylan has thought of everything.

However, a chance encounter opens his eyes to the attraction that has always lain between them, concealed by the layers of antipathy. There are only two problems – Gabe is still a bastard, and he makes wedding planners look like hardened pessimists.

Because Gabe is still the same commitment shy, cold man that he’s always been, or is he? Has Dylan had the same effect on Gabe, and has his solid gold rule of no commitment finally been broken? With his heart taken Dylan desperately needs to know, but will he get hurt trying to find the answers?

“All good sex comes with a side order of inappropriate laughter.”

Rule Breaker is a bit heavier than I was originally looking for, but the snark was pretty funny so it worked.  Plus, it was a nice change of pace from the previous two recommendations, so I think I was ready for things to drop a bit from super mushy.

Gabe was a very damaged man, and it was hard reading Dylan try to love him because you could feel how everything was heading for an explosion.  Unlike The Weight of it All, this explosion wasn’t bypassed, it was struck head.  It was so painful.  We as the reader knew Gabe wasn’t just being a dick.  He was terrified.  I think it was pretty accurate too, how sometimes we are so afraid of something that we don’t recognize how our fear is actually pushing it to happen anyway.  Gabe was so scared of loss, he rushed their relationship right toward it.  It was like flying toward a brick wall and being unable to change directions.

It was also rough to read for Dylan, because he knew the entire time his heart would be squashed, yet he never gave up on Gabe.  Maybe he should have, but the romantic in me is glad he didn’t.  In the good moments, where insecurities weren’t getting in the way, Dylan and Gabe were really good together.

I know I’m not an angsty reader, but I didn’t mind as much this go around.  In fact, I thought the resolution in the book was almost too easy.  It’s not that I particularly wanted someone to pay, but I thought they fell back together far too conveniently.

…Which is I guess why I gave Rule Breaker 4 stars.