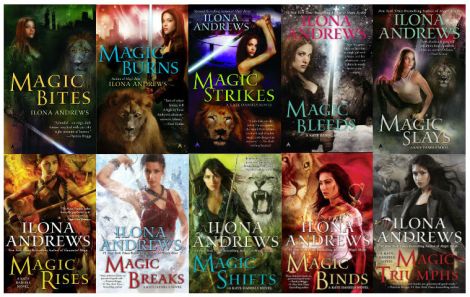 “When we started this buddy reread I felt like there were so many books to read, but it all went so much faster than I anticipated. I’m starting to feel sad, because when it’s over it’s over.”

That was my intro for Magic Shifts… and now it’s even worse because this is it.  There’s nothing left to read until Magic Triumphs comes out, not about Kate and Curran anyway.  It’s bittersweet, but exciting too, because it gave us the opportunity to talk about what our hopes for are in the final book.

Continue below for how we felt about Book 9, Magic Binds, and our expectations for the finale.  And thank you to Angie at BaBAMB for joining me in this long and glorious chat.

*Please be advised that since this is a discussion, there will be spoilers.

About the Book: Mercenary Kate Daniels knows all too well that magic in post-Shift Atlanta is a dangerous business. But nothing she’s faced could have prepared her for this…

Kate and the former Beast Lord Curran Lennart are finally making their relationship official. But there are some steep obstacles standing in the way of their walk to the altar…

Kate’s father, Roland, has kidnapped the demigod Saiman and is slowly bleeding him dry in his never-ending bid for power. A Witch Oracle has predicted that if Kate marries the man she loves, Atlanta will burn and she will lose him forever. And the only person Kate can ask for help is long dead.

The odds are impossible. The future is grim. But Kate Daniels has never been one to play by the rules…

Kate as a character showed some very unusual character traits in Magic Binds, being far more aggressive and angry with her close circle of friends.  How did you feel about Kate’s actions, and/or the reasons given for her short fuse and newer darkness?

Angie Elle: I think those character traits would have been unusual ‘pre-claiming’ Atlanta, but I think doing that magnified her magic and changed in ways she wasn’t anticipating, and it’s changing her. I like seeing the struggle, and I feel like she is reacting to the way her ‘friends’ are treating her. I was really frustrated at how doubting everyone seemed to be and I liked that she was getting angry. She’s on overload right now, and it’s not the even-keeled Kate we’re used to seeing. I really enjoyed this dynamic.

Birdie Bookworm: I actually didn’t find myself frustrated with her family.  I imagine that she was acting very strange, and she’s always been worried about how her power will affect her.  I think they saw how it was changing her and it made them worry, which made them extra on edge. You’re totally right, it would have been completely unusual ‘pre-claiming’.  It’s funny I can recognize that this time, but the first time I read it I found myself mad at her the first time. There is also a part of me that wonders if she’s also more susceptible because of the previous brain trauma.  Or maybe I’m just trying to find a larger reason we went through all that, lol.

While Kate has always struggled with her place in the pack, this was the first book where Curran and Kate were both treated as adversaries and potential enemies.  What did you think of the Beast Lord, and the other members, actions?

Angie Elle: You know, I gave this a lot of thought, and I was mad at first. But when I put Curran in Jim’s place and thought about it, I wouldn’t have been mad at him. Jim is putting pack first, and that’s what the Beast Lord is supposed to do. Do I love it? No, because I’ve been in Kate’s head for nine books and I love her character and want everyone to rally around her. But do I see why Jim is doing this? Yes, I do. And I have to respect him for that.

Birdie Bookworm: I could understand why he was keeping their battle with Roland at a distance at the start, but I can’t rationalize his actions after the attack on Baby B.  It’s blaming the child for the actions of the parent. It reminded me of how irrational I think Jim is, and why I don’t think he makes a good Beast Lord. He didn’t put the pack, or the people in Atlanta, over his own need for retaliation, and I don’t believe Curran would have been that rash.  He’d have handled it in a smarter way.

Angie Elle: I don’t know if it would have been smarter, maybe different. But if Kate was almost killed, I think Curran could be moved to act rashly. And I disagree; I think he did put the pack first. It was expected that he would retaliate. I don’t always care for the pack politics, but I guess it is what it is. I think he did what needed to be done.

Birdie Bookworm: You could be right, but I have a mental block with Jim I guess.  When Curran and Kate said he shouldn’t retaliate, but instead bide his time until it would be an effective retaliation, I agreed with them.  I thought when Kate pointed out how Jim only truly loved Dali, that he didn’t care about being loved by the pack, that was telling too. I don’t know, like I said, Jim is my mental block.

Angie Elle: Which I find interesting – Kate is way more forgiving of him than you are.

Kate has gained quite a mentor and ally in Erra. Do you think she can be trusted?

Birdie Bookworm: It’s funny, thinking of who we can actually trust coming into the final battle.  I kind of feel like I trust Erra more than I’d trust Ghastek, actually. I think Kate banking on Erra’s connection to the bloodline, her mom, and wanting to keep their family line alive is a great motivation.  I think I do trust her, surprisingly. And, I actually kinda fell in love with her character in Magic Binds.  I wasn’t interested in her as the villain in the previous book, but now I’m invested in her character

Angie Elle: Yeah, I love to hate her. She is very useful to Kate, and I think that she is so family centric and bitter about the way Roland treated his family and children that she would love to be a final nail in his coffin.

Birdie Bookworm:  I love to hate her too.  Yet, throughout Magic Binds I found myself just loving to love her.  She was so snarky and hilarious. I can’t wait for more of her and Kate.  Or of her and Curran, because that’s pretty funny too.

Julie has taken more of a forward roll in Kate and Curran’s world, not just as Herald but even taking on her own cases and having her own desk at Cutting Edge.  Do you think it’s deserved?

Angie Elle: The Cutting Edge cases, maybe. The Heralding?  No. When she followed Kate onto Roland’s territory, it highlighted how naive and stupid she was, and it made me like her character even less. I was cursing her the entire time. I will admit, though, that in listening to the audio, when Julie shouted ‘Glory to Shinar,’ I totally teared up. That’s the only time in this series I’ve liked her character.

Birdie Bookworm:  Guess what!  We are opposites here!  I actually thought it was perfectly written that the impulsive teenager took it upon herself to act as Kate’s Herald.  I also accept that in this version of Atlanta, Julie is a lot older than her physical years. I actually have a harder time with how it felt like in the previous book the worries were about how to keep her going to school, and suddenly she’s an active member of Cutting Edge.  It felt extremely sudden.

Angie Elle: I don’t feel like Julie presents a lot older than her physical years; I think the heralding proved that. It was impetuous and immature, and I really didn’t need more reason to dislike her.

Birdie Bookworm: Ah, we hit on your mental block.  😀

Kate mentioned at the beginning of Magic Binds how every time she drove past the casino, she felt more masters of the dead, journeymen and vampires. If Roland’s plan had been to gain some ground in Atlanta, Kate certainly foiled that in this installment by earning their loyalty. How big a part do you think Ghastek and the other casino-centric characters will play in the final battle?

Birdie Bookworm: I’m honestly not sure.  I think my biggest issue is, I’m not sure if I trust it.  I feel like it’s just as likely that someone is going to betray our group in the final book, and to bet on Ghastek may not be a bad guess.  He’s so power motivated, and while they’ve had bonding moments, I’m not sure I think he’s someone I’d trust to stay loyal.

Angie Elle: Oh, I would be so shocked if Ghastek betrayed her. He is power hungry, and what better way to become more powerful that to be part of the team that takes out Roland. Especially now since Kate won’t be able to stay in Atlanta once the battle is over.

Birdie Bookworm:  UNLESS, somehow it looks like Kate will lose.  I can picture Ghastek switching sides if he thinks her side is losing.  I don’t know. I guess I like his character, but I don’t trust him. I actually trust Saiman more.

Angie Elle: I haven’t even thought of Saiman’s role in the next book! And boy does he have some anger to work out toward Roland.

Before you go, please don’t forget to pop over to Angie Elle at BaBAMB and read the second half of our discussion!  You haven’t even gotten to the good stuff!  How about, which relationship do you hope gets a novella?  Or who we would most hate to lose in the final battle.
You’ll only have the full picture after reading both blogs, so go do it!