This week is going to be an interesting one.  Most of my map choices were selected because of what the world means to me.  Staring at the Lumatere map takes me right back to my love for the characters and the story.  Our map choices will probably mirror a lot of our fantasy favorites.

I can’t wait to see what everyone has chosen.

Damen is a warrior hero to his people, and the rightful heir to the throne of Akielos. But when his half brother seizes power, Damen is captured, stripped of his identity, and sent to serve the prince of an enemy nation as a pleasure slave.

Beautiful, manipulative, and deadly, his new master, Prince Laurent, epitomizes the worst of the court at Vere. But in the lethal political web of the Veretian court, nothing is as it seems, and when Damen finds himself caught up in a play for the throne, he must work together with Laurent to survive and save his country.

For Damen, there is just one rule: never, ever reveal his true identity. Because the one man Damen needs is the one man who has more reason to hate him than nyone else…

I love the shape of this map.  I love how Damen’s kingdom, Akielos is surrounded by water on three sides.  I love how close they are to their enemies in Vere, Laurent’s kingdom.  I also love looking at this map and thinking of how far the two men came together, both in their travel and in their relationship.

Six of Crows by Leigh Bardugo

Ketterdam: a bustling hub of international trade where anything can be had for the right price–and no one knows that better than criminal prodigy Kaz Brekker. Kaz is offered a chance at a deadly heist that could make him rich beyond his wildest dreams. But he can’t pull it off alone…

A convict with a thirst for revenge.

A sharpshooter who can’t walk away from a wager.

A runaway with a privileged past.

A spy known as the Wraith.

A Heartrender using her magic to survive the slums.

A thief with a gift for unlikely escapes.

Six dangerous outcasts. One impossible heist. Kaz’s crew is the only thing that might stand between the world and destruction—if they don’t kill each other first.

When I look at the Six of Crows map I think about how each of the characters comes from so far off.  I also think a lot about the Grisha trilogy, and the darkess.  So much happens in this book, and it takes place a little bit everywhere.

Finnikin of the Rock by Melina Marchetta

Finnikin of the Rock and his guardian, Sir Topher, have not been home to their beloved Lumatere for ten years. Not since the dark days when the royal family was murdered and the kingdom put under a terrible curse. But then Finnikin is summoned to meet Evanjalin, a young woman with an incredible claim: the heir to the throne of Lumatere, Prince Balthazar, is alive.

Evanjalin is determined to return home and she is the only one who can lead them to the heir. As they journey together, Finnikin is affected by her arrogance . . . and her hope. He begins to believe he will see his childhood friend, Prince Balthazar, again. And that their cursed people will be able to enter Lumatere and be reunited with those trapped inside. He even believes he will find his imprisoned father.

But Evanjalin is not what she seems. And the truth will test not only Finnikin’s faith in her . . . but in himself.

This is my favorite map of all time.  I’d love to have a large copy of this one, blown up as a wall hanging in my house.  The Land of Skuldenore looks like a brain, and each part of the brain is a different kingdom.  I also feel like I’m a part of each section of the Skuldenore brain.  It’s also a part of me.

In a land where three suns almost never set, a fledgling killer joins a school of assassins, seeking vengeance against the powers who destroyed her family.

Daughter of an executed traitor, Mia Corvere is barely able to escape her father’s failed rebellion with her life. Alone and friendless, she hides in a city built from the bones of a dead god, hunted by the Senate and her father’s former comrades. But her gift for speaking with the shadows leads her to the door of a retired killer, and a future she never imagined.

Now, Mia is apprenticed to the deadliest flock of assassins in the entire Republic—the Red Church. If she bests her fellow students in contests of steel, poison and the subtle arts, she’ll be inducted among the Blades of the Lady of Blessed Murder, and one step closer to the vengeance she desires. But a killer is loose within the Church’s halls, the bloody secrets of Mia’s past return to haunt her, and a plot to bring down the entire congregation is unfolding in the shadows she so loves.

Will she even survive to initiation, let alone have her revenge?

This map is a serious map.  It’s like Mia, it isn’t messing around.  It reminds me of the old maps, like the ones pirates carried, that showed monsters in the water in certain spots.  Considering there are actual monsters in Nevernight, it’s not a legend on this map, it’s a warning. 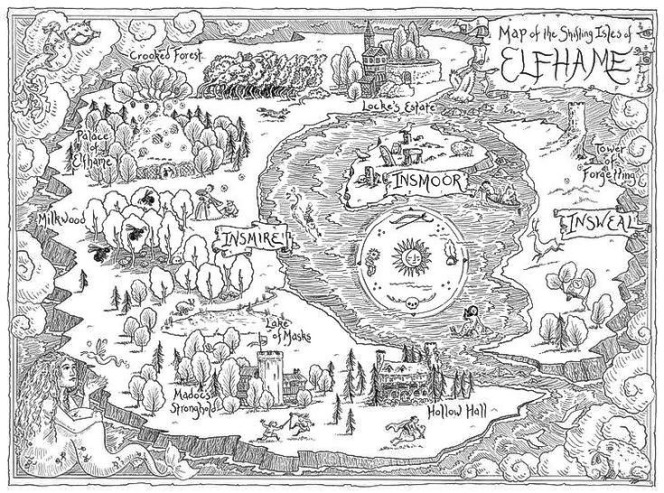 Of course I want to be like them. They’re beautiful as blades forged in some divine fire. They will live forever.

And Cardan is even more beautiful than the rest. I hate him more than all the others. I hate him so much that sometimes when I look at him, I can hardly breathe.

Jude was seven when her parents were murdered and she and her two sisters were stolen away to live in the treacherous High Court of Faerie. Ten years later, Jude wants nothing more than to belong there, despite her mortality. But many of the fey despise humans. Especially Prince Cardan, the youngest and wickedest son of the High King.

To win a place at the Court, she must defy him–and face the consequences.

As Jude becomes more deeply embroiled in palace intrigues and deceptions, she discovers her own capacity for trickery and bloodshed. But as betrayal threatens to drown the Courts of Faerie in violence, Jude will need to risk her life in a dangerous alliance to save her sisters, and Faerie itself.

I haven’t actually read Cruel Prince yet, but who wouldn’t love this map!  It’s beautiful and whimsical.  I love the mermaid edgings and the font used on the signs.  It reminds me of the fae, and it’s cute enough for deception, allowing me to think it’s a safe map when I’m pretty sure these fairies are evil.