I came up with this idea asking my loved ones if they would be interested in guest blogging on Birdie Bookworm.  I thought it would bring differing opinions, while helping me out with my blogging schedule.

I’d like to introduce you to my work spouse, Cat, for getting it all started!  This is her first time on Birdie Bookworm, but what an amazing start it is.  If you don’t laugh as hard as I did… actually, you will.  It’s hilarious!

And brave, I wouldn’t have gone near this read! 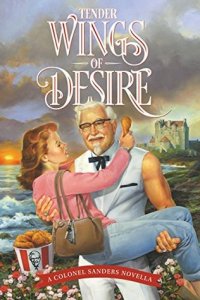 Have you ever had that moment, when waiting in the KFC drive through line, where you gaze at the backlit, plastic visage of Col. Sanders, daydreaming about the extraordinarily sexy backstory of such a hot piece of chicken mogul?

Wonder no more, my fellow freaky fetishers because Col. Sanders himself penned a short memoir of the secret herbs and spiciness that brought him a lady love of a lifetime in a sleepy hamlet on the British coast.  Just in time for Mother’s Day, KFC is offering this salty epic for FREE download on Amazon.  Tender Wings of Desire.

She was an independent Lady of the ton in Victorian England, burdened by the expectations of her stifled society and duty driven family.  Lady Madeline Parker was engaged to a duke, and everyone around her is thrilled at her good fortune.  Less than elated with her milquetoast Duke, she starts to wonder: where is my spicy life?  So she climbs on her horse and runs away, rejects the life of luxurious emptiness – to find happiness as a barmaid in a seaside sailor’s town.

And it is there she meets Harland Sanders.  As Madeline describes him: the most handsome man she had ever seen.  “He was tall, dressed like a sailor with a striped linen shirt and woolen peacoat crusted with sea salt.  His hair was light and fair, framing his head in airy curls, and the eyes … were almost the exact color of the sea … they hid behind glasses with dark frames.”  *WHEW* I don’t know about you, but they had me at ‘crusted with sea salt’.  How does that happen?  Is that actually a thing – where you spend so much time on the ocean your clothing becomes a farm for specialty salts?  And here he is just walking around with that shit instead of diligently scraping it off and selling it in little bottles for exorbitant prices?

Sorry, I got lost.  Back to the fried chicken romance.

In all seriousness – go, right now, download and read this masterpiece of Sexy Sanders.  And then gaze at the cover in all its ridiculous glory.  Observe the Colonel’s hard, muscular body shown off in tight pants, sleeveless shirt – with a collar still because we have to have his signature squirrelly tie – and his comfortingly familiar (and not at all creepy) old man head.  See Lady Madeline Parker (from Victorian England, remember, where they wore dresses the size of city buses) swept up in the arms of her steamy sailor, wearing jeans and a shirt, gigantic 70’s era purse carelessly slung over her shoulder.

I still can’t stop thinking about it.  If this doesn’t inspire a novella of Ronald McDonald’s prom night, I’ll be devastated.  I can see the title now: I Had the Fries of my Life.

I don’t even know what to say.
Thanks for taking one for the team, Cat!

If there is anyone wanting to take this journey with the Colonel, it is no longer free!  Apparently he wanted to capitalize on the Mother’s Day Weekend!  It’ll now cost you .99 to read this masterpiece.

What do you guys think?
Do any of you want to fly away on the Tender Wings of Desire?