I seriously love this feature!  I love seeing what my real world peeps come up with, and I think that they even enjoy the outlet too.  (They’d never admit it to me.  They like to pretend I’m torturing them instead.)

This week I’m bringing back Cat, who previously reviewed Tender Wings of Desire.  That one she chose herself, this one I placed in her hands.  She’s such a great sport for humoring me!

Read on for a hilarious review of How to Tame a Beast in Seven Days!

How to Tame a Beast in Seven Days 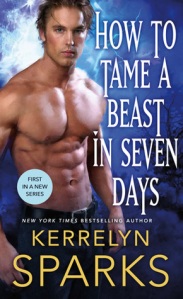 Hi!  This is Cat, Birdie’s coworker and office wife/sister/twin.  While we’re both voracious readers, our taste in reading material could not be more different.  I’m firmly in the non-fiction camp, mostly historical, and with occasional forays into historical fiction (that means Regency Romance trash novels.  Holy mother of fuck I love those things.  Not ashamed.)  Either way – my taste is pretty fixed in the ‘shit that could feasibly happen in the real world’ category.  So when Birdie said ‘Cat.  Do you think you would be interested in reading some paranormal romance novels?’  My first instinct was to say ‘Ha!  No.  Just no.  There will be ghost sex and I just don’t think I’m prepared to bring that into my mental realm, thanks’.

Obviously, I changed my mind as here I am typing out a bit of my thoughts after losing my paranormal romance virginity via Kerrelyn Sparks’ How to Tame a Beast in Seven Days.

First, we have to address the cover – which very nearly made me change my mind.  Granted, most trash novels of any stripe feature half nekkie and obviously horned-out folks.  This dude (The Beast, I presume) has the required shirtless stance, mountainous pectorals sloping into his rolling 8 pack (I just counted.  There are 8) which house one of the oddest navels I have ever seen.  It somehow manages to look like an outie and a black hole into a parallel universe at the same time.  Oh, and his facial expression sort of looks like you just interrupted some personal time and The Beast is not pleased with you, young lady.

In an attempt to convince myself to continue, I flipped to a random page in the middle of the book where I discovered that elves were involved.  ‘Birdie.  There are fucking elves in this book.’ ‘Cat, you said no wizards.  You said nothing about elves.’

Until chapter three, the struggle continued.  It took me two days to make it through the first two chapters.  It felt like torture.  I fully understand the need to establish the rules and conditions in a parallel reality, but I do feel like it could have been threaded more evenly into the story. Essentially you have a handful of individual kingdoms that are constantly at war with one another, and then a pair of islands (one of only women and the other containing only a Seer) that are peaceful, equal opportunity digs.  There are two moons, and when those moons rise together to meet in the sky, any children born during that time have special powers and are called ‘Embraced’.  The main characters, The Beast and Luciana are among them.  The Embraced are in danger, seen as monsters and often killed.  Consequently, they are in hiding, or seek refuge on the islands.  I honestly cannot describe any more, or I would ruin the first twist of the novel – and that was what finally got me hooked into the story.

Once I hit chapter three, it was a whole new world.  Yes, there were ghosts, and shape shifting humans, humans who could throw lightening and others that could talk to the dead.  But I didn’t particularly care so much.  The author used all of these extra abilities (ghosts acting as spies to protect the living, the shape shifting human/dog/seal on missions) as tools within the story.  They never got in the way of, nor became the focus of the story.

There was ghost sex, and it weirded me the fuck out.  Ghosts can rape other ghosts and inflict physical pain on other ghosts.  This may be why the ghosts seem to swear a lot.  Once you leave the physical world, it would seem the one benefit of being a ghost would be your independence.  Being stuck amongst the living surrounded by violent ghost gangs would certainly piss me off.

Elves and dragons made brief appearances, seemingly to introduce them for future books in the series.  They didn’t figure much in the overall story here.  I really don’t know if I could power through elves and dragons.  Then again, I was fairly certain ghost sex would be a deal breaker for me.

Overall – I did enjoy the novel.  It had all of the wonderfulness one expects from a good trash novel: misunderstood couple goes through ridiculous conflicts to find their own happily ever after – ghost sex and all.

I seriously can’t believe I got her to read this!

I’m even more thrilled she enjoyed it!

Catherine, this is going to open the door to so many new possibilities!  You’re seriously in for it now!