This is it!
It’s the last Kate Daniel’s book!
In honor of this spectacular series, Angie Elle and I are going to reread the entire series and share our thoughts with you!

If you haven’t read this series, here’s your chance!
October 26th!
It’s only one of the best Urban out there! 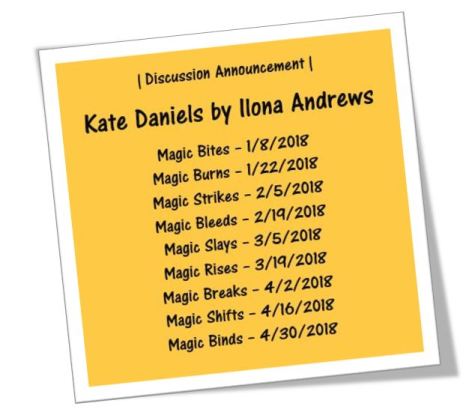 The world has suffered a magic apocalypse. We pushed the technological progress too far, and now magic returned with a vengeance. It comes in waves, without warning, and vanishes as suddenly as it appears. When magic is up, planes drop out of the sky, cars stall, electricity dies. When magic is down, guns work and spells fail.

It’s a volatile, screwed-up world. Magic feeds on technology, gnawing down on skyscrapers until most of them topple and fall, leaving only skeletal husks behind. Monsters prowl the ruined streets, werebears and werehyenas stalk their prey; and the Masters of the Dead, necromancers driven by their thirst for knowledge and wealth, pilot blood-crazed vampires with their minds.

In this world lives Kate Daniels. Kate likes her sword a little too much and has a hard time controlling her mouth. The magic in her blood makes her a target, and she spent most of her life hiding in plain sight. But sometimes even trained killers make friends and fall in love, and when the universe tries to kick them in the face, they kick back.

Whether you’ve read it or not, join us!
We’d love to read your series updates!  🙂

Leave a Reply to Beware Of The Reader Cancel reply