Title: I’ll Meet You There 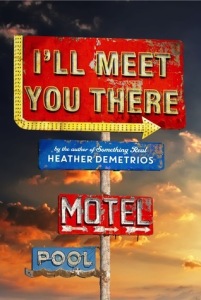 About the Book: If Skylar Evans were a typical Creek View girl, her future would involve a double-wide trailer, a baby on her hip, and the graveyard shift at Taco Bell. But after graduation, the only thing separating Skylar from art school is three months of summer…until Skylar’s mother loses her job, and Skylar realizes her dreams may be slipping out of reach.

Josh had a different escape route: the Marines. But after losing his leg in Afghanistan, he returns home, a shell of the cocksure boy he used to be.

What brings Skylar and Josh together is working at the Paradise—a quirky motel off California’s Highway 99. Despite their differences, their shared isolation turns into an unexpected friendship and, soon, something deeper.

Compelling and ultimately hopeful, this is a powerful examination of love, loss, and resilience.

“If you could make a beautiful piece of art from discarded newspapers and old matchbooks, then it meant that everything had potential. And maybe people were like collages–no matter how broken or useless we felt, we were an essential part of the whole. We mattered.”

One of the best aspects to being part of online reading communities is that you rarely have to pick up a book blindly; instead you can check and see what your online friends thought first.  When you know whose tastes are similar to your own, you can be pretty sure that you’re picking up something that’s going to be worth it.

Discovering I’ll Meet You There was as close to old school book shopping as I get.  I walked into B&N, on an outing with my Grandma, just to spend time perusing the shelves.  I randomly pick up books that look interesting, scan them into my phone and (after looking at the rating) scroll through my Goodreads friends reviews to see who loved it, who liked it, and who panned it.  That’s when I decide whether or not it’s worth buying.  I’ve done this a million times.

With I’ll Meet You There, after I picked it up and scanned it to see the rating (4.05, with 9200 ratings), I stopped.  I wanted it so badly I didn’t care what others thought of it.  In fact, I didn’t even want to know.  There was just something about the cover and book blurb that spoke to me.  For all my YA Contemporary/Realistic reads, the ones that are about the struggle, I don’t think I’d read one that was about a wounded soldier.  It was Josh that pushed me to buy, virtually un-investigated.

What’s even more astonishing is that I wasn’t nervous at all.  While I rarely buy a book without research, I regularly request ARC’s willy-nilly.  Every time I do there’s always little flutters of fear that I’ll hate it.  I hate giving bad reviews.  I want to love every book I read.  I just knew I was going to like this book, which is crazy.  I did like it, which is even crazier!  It’s like winning the reading lottery.

While it was Josh’s story that caused me to buy the book, upon reading I found I was equally intrigued with Sky.  I appreciated how she attempted to keep her life on the straight and narrow, no getting in trouble, no drinking.  Her dream was to go away to school, get out of her small poverty ridden town and find a place where she belonged.  I loved that she felt that way, but she was also incredibly loyal to her mother, best friends, and to the Paradise Motel.

I was extra pleased that even though she had this plan for herself, and Josh was a speed bump, she didn’t treat him badly to push him away or come up with dumb reasons to not spend time with him.  For being so closed to the idea of a relationship, she was actually really open when confronted with one.  I really loved that.

Of course Josh was a good character too.  Over the course of the book Sky was the main POV, however intermittently we got short interludes from Josh’s perspective.  Those were the moments that really got to me.  It was those small little sections that brought the tears to my eyes because he made me feel his pain.  I’m sure that some of Josh’s emotions were romanticized, such as being with Sky making his nightmares better, but overall I think the author did a great job describing the emotional wounds that soldiers come home with.  It was heavy, and I believed it.

The side characters were well written too.  They weren’t as vibrant as the main characters, but they were good supporting roles and I have no complaints.

Speaking of complaints, if I had to list one, it would be the situation with Billy.  (Sky’s mom’s boyfriend.)  A lot of time was spent making him sound like a scary pedophile pervert.  I felt like that should go somewhere, something should happen.  In the end I thought that snippet of the story wasn’t examined enough, but perhaps that’s why so many people are hoping for a sequel.

If one is ever written, I know I’ll be in line waiting to read it.