Today, for the first time, I allowed my daughter to walk with her friends (in a group) to the gas station up the road.

I’m sure there are people out there who would shrug like it’s no big deal, and probably people who think I’m nuts.  I generally fall into the second category.  She’s a very responsible 13 year old, in a group of friends, and it’s at the end of a quiet, residential, dirt road in the country.  I’m still uptight about it.  I want keep her safe, and “in my cave”.  (Totally my favorite quote from The Croods, despite how it was the opposite of what the movie was about.)  Another part of me recognizes that I have to let her grow and I have to begin trusting her.  So, last summer she was able to walk around our small neighborhood (with friends), and today I allowed her to walk to the store (with friends).  For the first time.  Eep!

Of course, before I let my daughter leave on her quest for chips and a drink, I ran down my internal fears (like how she has to cross over railroad tracks, even though I’ve drilled proper train track behavior into her head and I’ve heard that at some point I have to trust her), and also the verbal rules.

“Give me everyone’s phone number.”
“You go straight there, no dallying in the store, and straight back.”
“You come right in the house and let me know you’re back.”
“You wear your jacket and stay warm.”
“You guys all stay together and protect each other.”
“Act appropriately in the store.  They don’t like rowdy rude kids.”
“Did you hear what I said about right there and right home, and let me know when you’re back!“

She was very patient with me, even when her friend is standing next to her and I’m sure it’s embarrassing.

Normally I don’t post a lot about my life, because I just don’t think it’s that interesting but also because this is a book blog and it should probably be mostly about books.  I’m making an allowance though, because it led me to thinking about books!  I started thinking about myself in terms of the usual parenting representations in a YA novel.  It’s helped distract me, because why aren’t they back yet!?

Anyway, I realized I’m that YA mom.  I’m the one that zips up the kids coat, fixes the collar, smooths out the wrinkles, brushes their hair back, follows them out the door and then waves like a crazy person as they head off down the street.  I’m also completely okay with it.  Maybe it drives Baby Chick up a wall, but I’m sure inside (which her teenage mind refuses to admit) she appreciates it.  Right?

YA books have 4 types of parents.  They have the laid back cool parent, that knows everything and they’re perfect best friends.  You have the parent’s like me.  The ones that make a big deal out of everything, and that worry too much.  Then, you have the parents that are there but they don’t really parent.  And finally, you have the ones who are literally gone.  Dead or split.  Obviously we all want to be in the two top options.  So, I suppose if I’m physically incapable of being parent type A, then I’m perfectly content to be parent B.

Where are you, in relation to fictional parents? Are you parent A, or parent B like me?  Also, why aren’t they back yet??!
This is so not happening again! 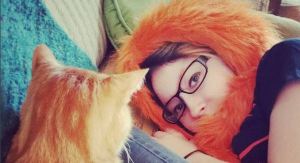