About the Book: Kell is one of the last travelers–magicians with a rare, coveted ability to travel between parallel universes connected by one magical city.

There’s Grey London, dirty and boring, without any magic, and with one mad King–George III. Red London, where life and magic are revered–and where Kell was raised alongside Rhy Maresh, the roguish heir to a flourishing empire. White London–a place where people fight to control magic and the magic fights back, draining the city to its very bones. And once upon a time, there was Black London. But no one speaks of that now.

Officially, Kell is the Red traveler, ambassador of the Maresh empire, carrying the monthly correspondences between the royals of each London. Unofficially, Kell is a smuggler, servicing people willing to pay for even the smallest glimpses of a world they’ll never see. It’s a defiant hobby with dangerous consequences, which Kell is now seeing firsthand.

Fleeing into Grey London, Kell runs into Delilah Bard, a cut-purse with lofty aspirations. She robs him, saves him from a deadly enemy, and finally forces Kell to spirit her to another world for a proper adventure.

Now perilous magic is afoot, and treachery lurks at every turn. To save all of the worlds, they’ll first need to stay alive.

I think hyped books and authors are scary.  It’s this mixed feeling of wanting to read something everyone is calling ‘spectacular’, and then being afraid that you’ll be that one voice of dissension.  Sometimes I never touch a hyped book, and sometimes I give in.  I gave in to A Darker Shade of Magic.  I was even extra courageous, I bought it in print!

After letting it sit on my shelf for a few months, I finally read it.  Fast.  It was so good.  Until finishing A Darker Shade of Magic I’d not read anything else by Victoria Schwab, and I’m really happy that this was my first one.  I’m always on the prowl for Fantasy books that don’t follow the current fantasy trend.  (Right now that’s all kinds of stories similar to Throne of Glass.  They’re even remaking covers to mimic them.  It annoys me.)  A Darker Shade of Magic definitely stands alone, having one of the most unique premises I’ve read.

“There’s Dull London, Kell London, Creepy London, and Dead London,” she recited, ticking them off on her fingers.  “See?  I’m a fast learner.”

Even better, there was more to the story than awesome world building. The characters were pretty amazing too. I liked Kell immediately, right from the first paragraph about his coat.  Just like the four London’s, I’d never read another character like Kell.  He felt both young and mischievous, and he felt older and wise.  I understood his internal struggle with his life, and adored his love for Prince Rhy.  In fact, this was one of my two favorite aspects of A Darker Shade of Magic.  Rhy and Kell simply love each other like the closest of brothers.  There weren’t really jealousies or arguments.  It was incredibly sweet.

My other favorite part of the story was Delilah Bard.  I know that I usually go on about women in novels that are strong in nonviolent ways, but Lila was really just awesome.  It wasn’t even her prowess with her weapons.  It was her wit and her dreams.  It was in the moments of vulnerability that we’d glimpse.  Schwab knows how to write a female character with grace and strength.  I loved Lila.

I’m trying to think of something I didn’t like, or a reason that explains why I’m only rating A Darker Shade of Magic 4 stars.  I got nothin.  I guess this one boils down to how I’m hoping that A Gathering of Shadows is even better.  I love to leave one to grow on. 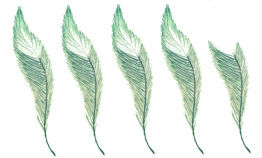