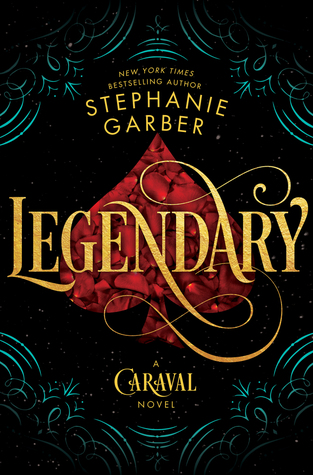 About the Book:  Stephanie Garber’s limitless imagination takes flight once more in the colorful, mesmerizing, and immersive sequel to the bestselling breakout debut Caraval

A heart to protect. A debt to repay. A game to win.

After being swept up in the magical world of Caraval, Donatella Dragna has finally escaped her father and saved her sister Scarlett from a disastrous arranged marriage. The girls should be celebrating, but Tella isn’t yet free. She made a desperate bargain with a mysterious criminal, and what Tella owes him no one has ever been able to deliver: Caraval Master Legend’s true name.

The only chance of uncovering Legend’s identity is to win Caraval, so Tella throws herself into the legendary competition once more—and into the path of the murderous heir to the throne, a doomed love story, and a web of secrets…including her sister’s. Caraval has always demanded bravery, cunning, and sacrifice. But now the game is asking for more. If Tella can’t fulfill her bargain and deliver Legend’s name, she’ll lose everything she cares about—maybe even her life. But if she wins, Legend and Caraval will be destroyed forever.

Welcome, welcome to Caraval…the games have only just begun.

“Every good story needs a villain.
But the best villains are the ones you secretly like.”

When I finished Caraval and realized it would be a series, I wasn’t sure if I wanted to keep going.  I liked reading about Scarlett and Julian, and frankly I wasn’t sure I liked Tella’s character enough to be interested in a story with her as the lead.  I also wasn’t sold on a story that relied heavier on Legend.

I’m definitely eating crow now, because after finishing Legendary I prefer Tella as the heroine!  And, I developed a massive crush on Legend, and I’m not even ashamed about it!  BUT, I’m not going to talk about Legend, there should always be an air of mystery surrounding our villain(?).  However, as the heroine, Tella was vivacious and bold.  I loved how she threw herself into the adventure fearlessly, and when she was afraid she still proceeded as though she had all kinds of confidence.  I’m more like Scarlett, but I admire characters like Tella.  I want her grit.

I also found myself captivated by the new plot, and this new game of Caraval.  The Deck of Destinies was fascinating, and I was scarily obsessed with Jacks.  The game was flipped, and it gave Legendary something new to offer the trilogy when it could have easily felt copycat.  It all felt so much more serious for Tella, more real.  I also thought it made the story more interesting that we already knew the Caraval players from Book 1.  It was almost like we were getting a behind the scene glimpse of how Caraval works.  I felt like I was a player in the game.  It’s another reason I enjoyed Legendary more than Caraval.

Stephanie Garber also did an amazing job developing the bond between Tella and Scarlett, too.  In Caraval, Scarlett talked about how much she loved her sister but I didn’t really get a handle on the depth of Tella’s love for Scarlett.  In Legendary I felt it from both of the sisters.  In fact, I felt like there was an equal amount of time spent on the love between Scarlett and Tella as there was spent on Tella’s romantic affairs.  I think it helped how both girls were actually in the story, of course.  In Caraval it was hard to determine Tella’s feelings when she was only in the first, and last, few chapters.

If I were to criticize one thing it would be how I struggle with a story when everyone falls in love with the main character.  Tella was adorable, but it’s okay if everyone doesn’t fall head over heels for her.

I’m not detracting a star for it though, because everything else was amazing.  I loved Legendary.  I was wrong when I wasn’t excited for Caraval’s sequel, but I sure am excited for the finale!