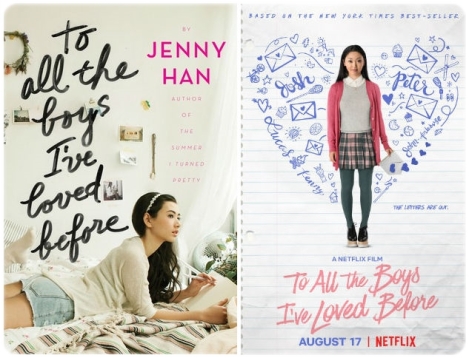 Goodreads Synopsis:
What if all the crushes you ever had found out how you felt about them… all at once?
Sixteen-year-old Lara Jean Song keeps her love letters in a hatbox her mother gave her. They aren’t love letters that anyone else wrote for her; these are ones she’s written. One for every boy she’s ever loved—five in all. When she writes, she pours out her heart and soul and says all the things she would never say in real life, because her letters are for her eyes only. Until the day her secret letters are mailed, and suddenly, Lara Jean’s love life goes from imaginary to out of control.

I really really liked this trilogy.  I enjoyed the awkwardness and femininity of Lara Jean, especially when YA females tend to be written as bold.  Even though some would say it was cheesy, I was invested in how Lara Jean found love, and I was especially excited about who she found love with.  So, when I found out To All the Boys I Loved Before was going to be a Netflix original movie I was super geeked!

I do try and keep my eye out for beloved books hitting the big screen, but somehow this one got by me.  I only found out about it a few months ago, thank goodness because it meant my wait wasn’t long.  I gotta admit, my excitement waned when I saw the trailer.  It looked overly exaggerated, and not what I was hoping for.  Since I knew I was still going to watch because I was going to write up this comparison, so I’m happy to say the final movie was so much better than I’d anticipated!!

Now, a quick run down of changes I noticed (if you haven’t read the book, you may want to skip this part):  From what I remember of the trilogy, most of the characters were part of the same group when they were children.  John Ambrose went to school with Peter, Gen, Chris and Lara Jean.  Back then Peter and John Ambrose were best friends.  However, in the movie it alludes to them not having known each other.  Or maybe it was really that Lara Jean didn’t want to tell Peter one of the letters went to his childhood bestie?  –I secretly hope so, because I’m holding out for a PS I Still Love You follow up movie!

Also, there was one scene where Lara Jean was making cupcakes but she wasn’t a baker like in the book.  I actually missed that.  I’m not sure why it was left out… it doesn’t seem like throwing in a few more baking scenes would have made the movie more expensive, and it was a big part of Lara Jean’s personality.  OR, if they were leaving it out, why wasn’t it left out entirely?  What was the point of including the cupcake vs brownies moment?  Either commit, or cut it entirely.

I also remember seeing the trailer and thinking Lara Jean didn’t look biracial, which is fine, I just wondered if in the movie she wasn’t supposed to be.  When the movie began I started remembering (and this could be a false memory) how in the book Lara Jean did mention she looked the most Asian out of the three Song sisters.  If my memory was correct, kudos to the adaptation for keeping to the bones of the book.

It probably sounds like I’m complaining, but there was so much goodness about this movie.  They got so much right.  They stuck to all the important parts of the movie, and even enhanced aspects.  So, now the question is, which was better?  The movie, or the book?

To All the Boys I Loved Before Movie

It is SO hard to say this but, as much as I loved Jenny Han’s book I know I’ll be rewatching the movie before I would reread the book.  There was something about seeing these characters come to life that hit all my emotional buttons.  I was so hooked, squirming from the adorableness of Lara Jean and her trials and tribulations.

However, what really sealed the deal was Noah Centineo as Peter Kavinsky.  I already loved his character from the books but Noah added the necessary spark that brought him to life.  He was the biggest reason Baby Chick and I were so invested in the movie.  Watching how adorable he was with Lara Jean is THEE reason I want those sequels so badly.

I also have to tip my hat to Anna Cathcart as Kitty!  She nailed the roll, and reignited my need for Jenny Han to write a spin off series for LJ’s baby sister!  Because she’s awesome, and because I want to see Peter and LJ 3 years later!